Events in the city 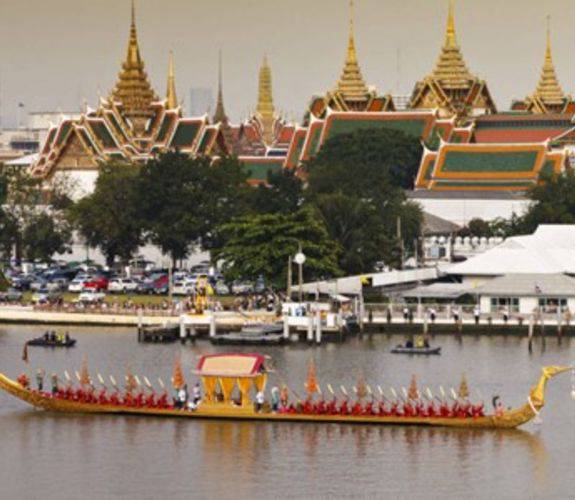 A majestic tradition of Thai culture and heritage.

Thailand's Royal Barge Procession is a ceremony of both religious and royal significance that has taken place for nearly 700 years. The royal barges are a blend of craftsmanship and traditional Thai art. The Royal Barge Procession takes place rarely, marking only the most significant cultural and religious events. During the long reign of King Bhumibol Adulyadej - spanning over 70 years - the procession only occurred 16 times.

This year, however, as the final procedure of the Coronation of King Rama X, the Royal Barge Procession will be held on October 24th. The procession will begin at Wasukri Pier and His Majesty the King will travel four kilometres along the Chao Phraya River, past Riva Surya to Rajaworadit Pier.

About 2,300 oarsmen will row over 50 barges, which will be arranged in five groups. Rhythmic barge-rowing chants are part of this ceremonial water borne procession and the chants are composed solely for the procession, to a soothing tune which pairs remarkably well with the entire ceremony and to the smooth rowing technique. The music, the precise choreography and the elaborate fleet of vessels makes the Royal Barge Procession a truly grand spectacle to witness.

Although the fleet consists of 52 barges, there are just four main Royal Golden Barges, which can be seen on display throughout the year at the Royal Barges Museum in Bangkok. The most spectacular barge in the fleet is "Suphannahong". Carved from a single trunk of teakwood, the barge is 44.9 metres long and employs 50 oarsmen. This enchanting golden boat is formed in the shape of a mythical swan and features a crystal ball hanging from its teeth. In 1992, The World Ship Trust granted Suphannahong the Maritime World Heritage Award.